エコーニュース＞English＞Fukushima incident is no surprise. Japanese MOFA report in 1984 revealed. ‘’18000 acute die. Plus 24000 die of cancer even if evacuated. The sites are located in rural area, in reality ’’

Fukushima incident is no surprise. Japanese MOFA report in 1984 revealed. ‘’18000 acute die. Plus 24000 die of cancer even if evacuated. The sites are located in rural area, in reality ’’

Fukushima incident is no surprise. Japanese MOFA report in 1984 revealed. ‘’18000 acute die. Plus 24000 die of cancer even if evacuated. The sites are located in rural area, in reality ’’

According to the report on military attacks on nuclear power plant Ministry of Foreign Affairs (MOFA) planned, we came to some features quiet interesting after Fukushima era. In spite of that the report is drawn in 1984, the situation is quiet similar to the current Fukushima Nuke disaster, though it is caused by natural disaster not by a covert attack. This report is inspired by Israeli Attack to Iraqi Nuke reactor just before start operation.

Firstly, the report calculate the casualties in acute stage ( The paper does not take account into the risks of spent fuel pool at all. ) . Only if one nuclear reactors were destroyed by missile attacks or bombing, at maximum 18000 persons shall be dead given an average location of nuclear power station in U.S.

And next. Approximately 24000 may die of cancer even if they relocate after the loss on containment. It is mainly caused by radioactive plumes which the residents near the site inevitably swallow into their lungs by breathing. The primary cancer leads to fatality is, thus, lung cancer.

Thirdly, The decontamination in wide area is quiet difficult. At worst, 87km radius from the site can be contaminated as seriously as necessary to relocation. Now, it shall be added that after 3.11 Japanese government used thousands of billions of yens for decontamination in Fukushima for 3 nearly years, now can not lead to the fruit yet.

And, it should not be missed that given the inhere danger, MOFA had sought it was quiet natural to the location of nuclear power plant; heavily intensified in rural area.

In author’s point of view, it is cynical that the rural people, the possible casualty of nuke plant accident biggest probability are the most willing to re-start the operation of nuclear power plant in Japan. The reason they claim is, without the nuke facility, the local economy collapses. It makes sense, to some extent. However, the community itself and the home can be completely destroyed by nuke accident. As the Fukushima disaster showed, and this MOFA report expected. The community arguing for the necessity of nuke reactor in the area seemed entrapped to the temporally sweet ” candy ” of economy compensating their lives.

It should be pointed that, the Asahi shim bun report, released in July 2011, somehow completely missed mentioning (1) Location centralized to rural areas (2) hardness for decontamination and (3) the aftermath effect of developing cancers. Accoding to the article, they have gotten the full volume of the document, while keeping three big breaking news for a few years.

I can not help expressing the doubt ; they are just an governmental agency, not a journalistic media. No difference from Xinhua, in China exists. 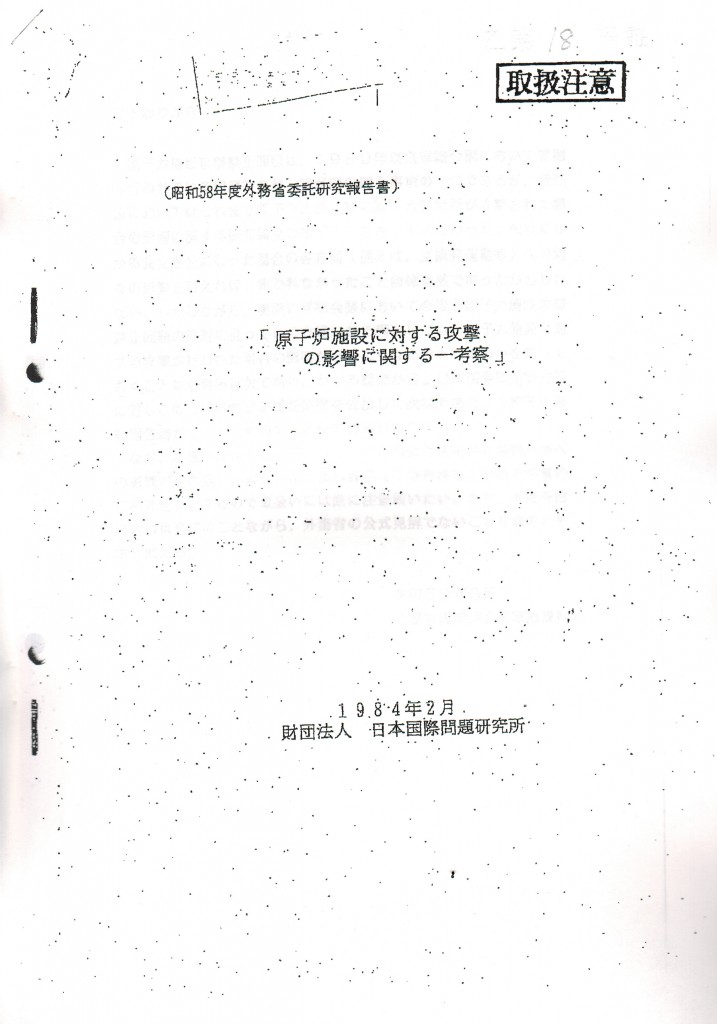 (The first page: a consideration on nuclear plant attack, 1984 MOFA’s backed up study) 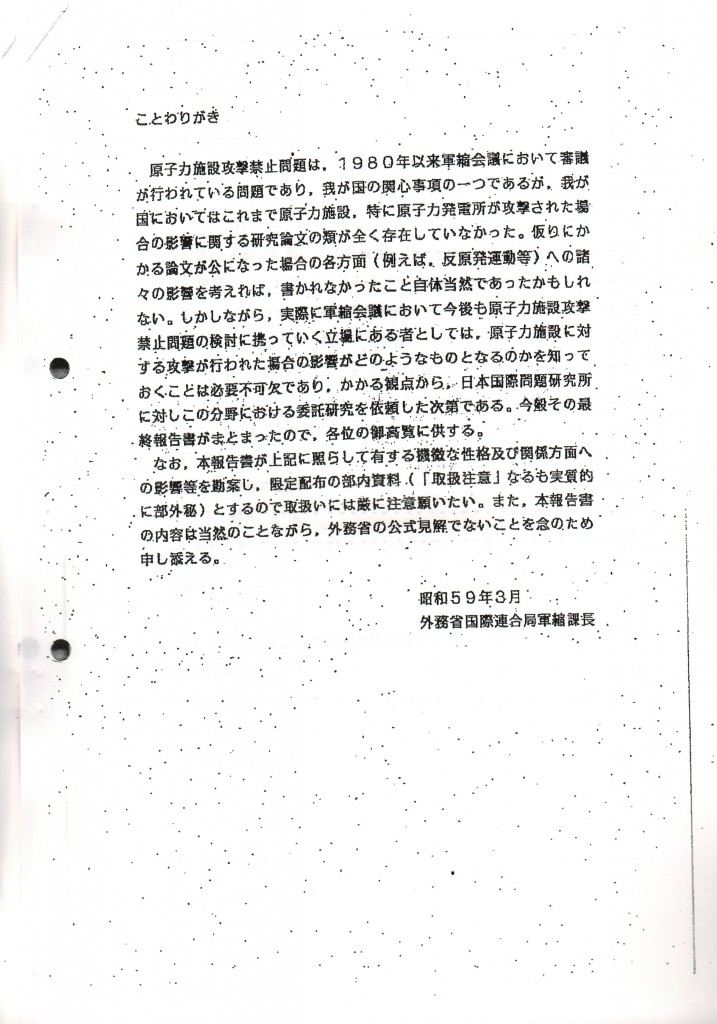 ( ”Keep it out from the eyes of our section” MOFA UN Bureau, Disarmament section chief saids. ) 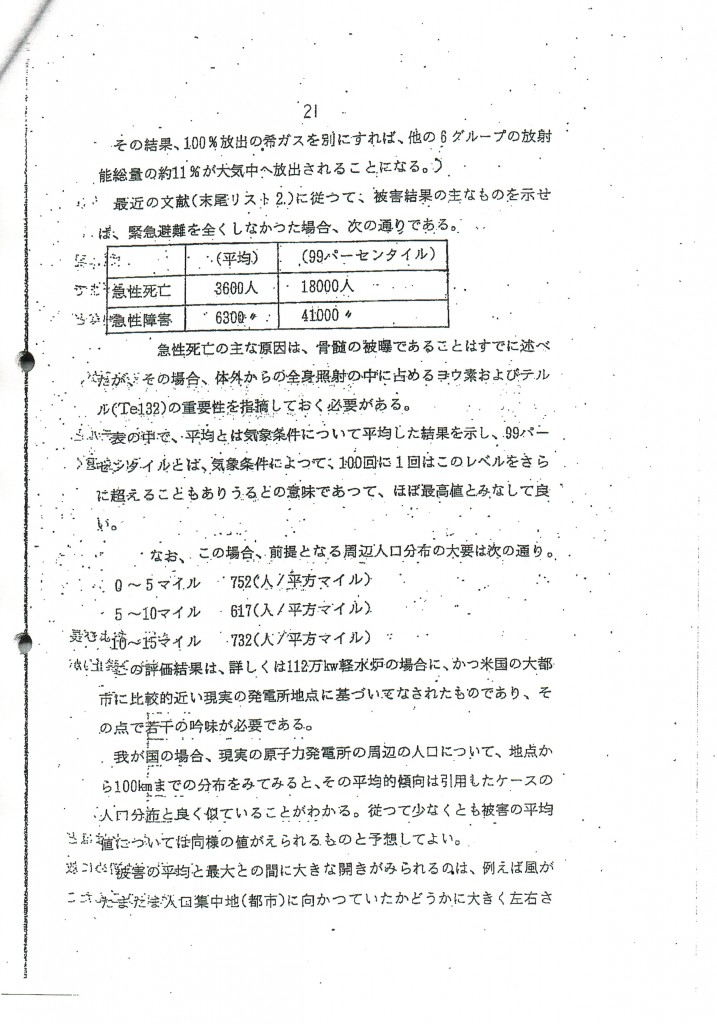 (In another page: ”24000 can die by cancer, mainly caused by the radioactive plumes they are exporsured, even if they relocate aftermath” the image also mentions on decontamination in wide areas as” very difficult, questionable whether it really works. ”)